Comprised of a perfectly matched pair of Deluxe pistols, Cabot’s flagship ultra-premium 1911, comes Black Ice Megaloceros Giganteus. Hand finished over several days under the watchful eyes of Master Hand-Polishers, the deluxe mirror image right and left-hand pistols don’t just reflect the light that hits them, they seem to capture it and shout it back in a dense visual cacophony. The giant Irish elk also called the Megaloceros Giganteus, made its last stand in western Siberia, about 7,000 years ago. It first appeared about 400,000 years ago in Europe and central Asia. The ancient creature is perhaps best known for its feature in The Hobbit – The Battle of the Five Armies – as the method of transportation for the elvish king, Thranduil. The male Megaloceros Giganteus had enormous antlers as big as 12 feet and weighed up to 90 lbs. The giant Irish elk is a reference to its remains that are often found in lake sediments under peat bogs in Ireland.  It is from the ancient unearthed partial remains of the antlers of this creature that we have crafted the grips for this pistol set. 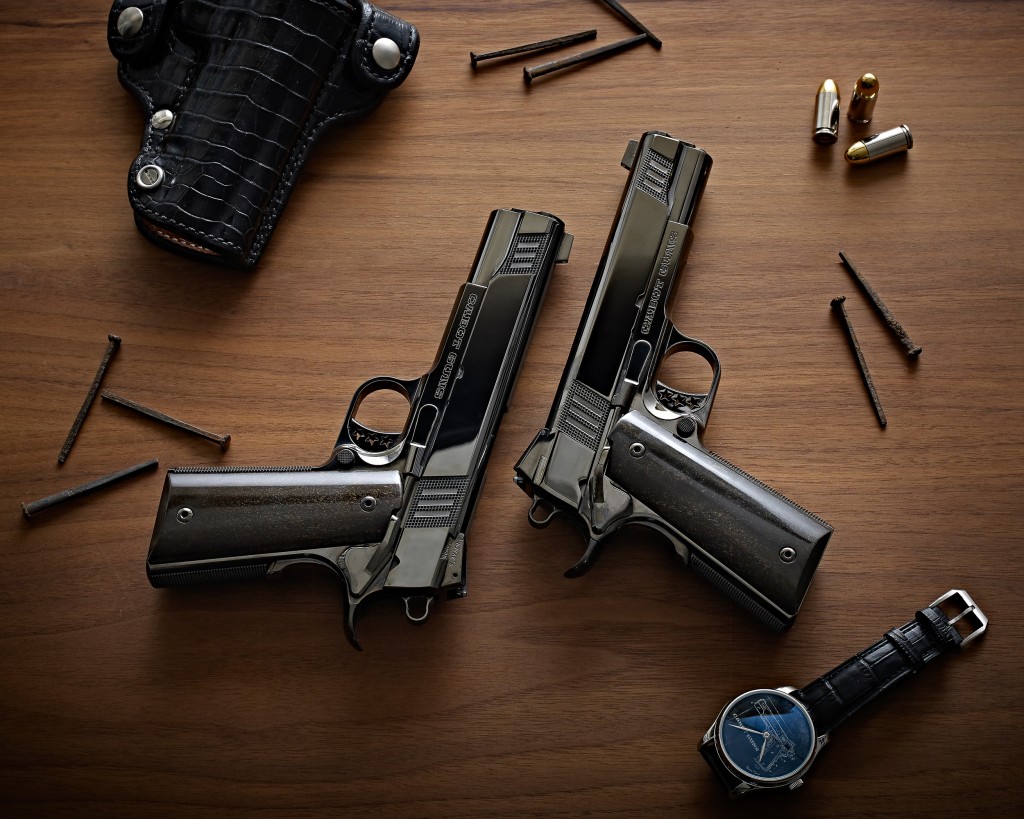 Cabot’s signature Trinity Stripes and cocking serrations grace the slides both at the front sight, and just forward of the rear sight, providing for confident yet elegant racking of the pistol into battery. Fine checkering at the front and back straps lends security of grip in bringing these pistols to bear. The serrations and checkering framing the powerfully subtle marking of Cabot’s quality engraved onto each pistol just in front of the hammer. Too breathtaking to be hidden from view. Sheltered in their individual bays, the pistols may be viewed through locked Lexan, safe from the fingertips of the envious. Or you may opt to fully share the visual prowess of these glorious 1911’s, unlocking the case and allowing hydraulic lift arms to slowly reveal the true polish combined with Diamond-Like-Carbon (DLC) finished we call Black. Once opened, the internal magazine well inserts pivot perfectly from the horizontal to the vertical – allowing a touch-free observation of all angles of these master-crafted handguns. The stuff of dreams and secret agents, this unique display ensures that no matter the circumstance